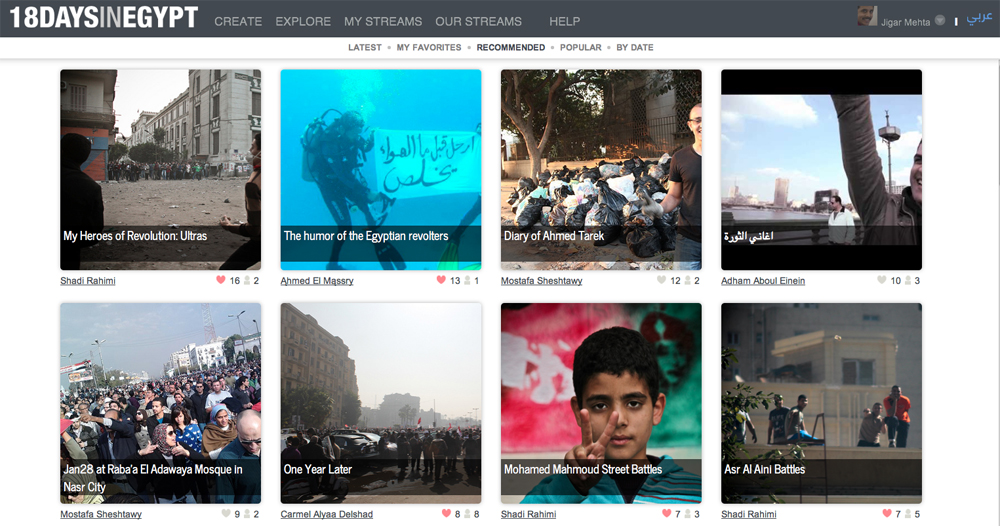 On January 25th 2012, the one-year anniversary of the start of the Egyptian revolution, we launched 18DaysinEgypt.com. No red carpet, no world premiere. It was a moment that we had spent many months building towards, but the site was not our final product. The launch was the beginning of our documentary about the revolution. Our audience is our collaborator.

18 Days in Egypt is an interactive documentary project that tells the story of the ongoing Egyptian uprising, using the personal media created by Egyptians in the crucible of the revolution. We want Egyptians to tell this story together, with their footage, their photos, their e-mails, their texts, even their Tweets and Facebook status updates, all created during the last year in Egypt, particularly but not limited to the first 18 days of the uprising, January 25th to February 11th, 2011.

Not a blank canvas

When we opened the project on January 25th, we did not want participants to see a blank website waiting for the first person to tell their story. We wanted them to see an active community that encouraged them to join in the conversation and contribute to the larger story. Our approach was to start with a small group of beta users two weeks before launch to populate the site. Not only were these users populating the site with content; they were helping to set the tone for the larger community. 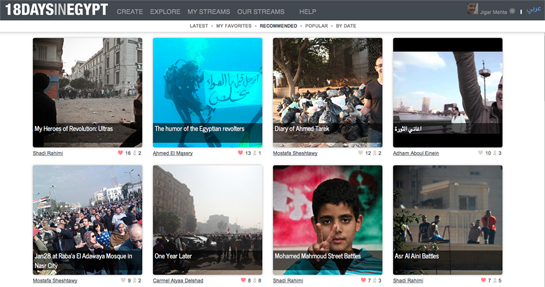 One of the keys to the early success of pre-populating the site was our fellows program. We have used part of our funding to hire 6 young Egyptian journalists and students to work with us as field producers. They act as the bridge between the online platform we developed and the reality of Egypt, helping others use the site but also sourcing stories from those who don’t have access to the Internet. They help digitally divided Egyptians get their stories onto the site.

A different type of world premiere

Well, we actually did have a world premiere. On January 19th, 2012 we had a launch event at Tahrir Lounge in Cairo, just steps from Tahrir Square. The event not only created a focal point for our team in terms of development of the site (hard deadlines are good motivators), it allowed us to have a physical manifestation of the site. What better way to expose the power of group storytelling than by getting stakeholders together in a physical space.  Over 400 people attended, were exposed to the site and embraced our collaborative vision. We made a story about it as well for the website.

Much like having a press screening of a film, having a pre-launch event helped generate online buzz and local press ahead of the actual launch. It was also strategic not to have the launch on January 25th as no press would be available to cover our event on the one year anniversary.

Little did we know that major revolution events would occur a week into our launch.  Exactly one year after the Battle of the Camels (when thugs on camelback stormed into Cairo’s Tahrir Square and beat protesters), a soccer match between rival teams erupted in violence, leaving 74 dead. 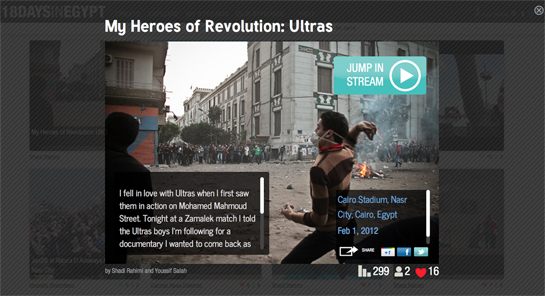 In a matter of minutes on February 1, the death toll climbed from 5 to 20 to over 70. Our fellows gathered personal interviews and firsthand footage from on the ground to create a stream capturing little known details of the Ahly Massacre.

The die hard soccer fans, known as Ultras, retaliated with marches against the military council, which they believe orchestrated the attacks on the pro-revolution Ultras.

A funeral for the youngest killed in the attack—a 14-year-old—was captured through the words of his friends just minutes before and after his funeral service.

As the clashes continued, our fellows focused on stories from the frontlines, including those about women, shopkeepers who stay open despite being surrounded by violence, motorcycle ambulances, and the tough task of negotiating a truce.

The Port Said tragedy showcased the importance of being prepared for the unexpected. We benefited from the fellows having spent 3 weeks working within the platform, developing their own workflow that maximized their efficiency. It is doubly important because one of the aspects of the fellowship is the personal development of them as storytellers.

Our fellows have done a great job thus far in documenting the ongoing revolution, experimenting in new types of storytelling using social media, but the next challenge for us is harnessing networks to turn magnitudes of others into contributors.  With a crowd sourced project like ours, the stories are the life of the project.

When ‘the ask’ is simple, the contributions increase but the overall quality of the stories suffer. It is a topic we are spending considerable amount of time exploring, how to bring more people into the experience as storytellers not just observers and maintain a high level of quality in the stories.

It is a major area of focus for us as we iterate the site and something we are working with our mentors on, but it would be good to open up the discussion in the comments below.

For us, much like the revolution, the process continues today, January 25th was merely the beginning.