Inspired by Sasha Boersma‘s earlier tweet, i’ve put together a short list of i-Docs that you may have missed and have been re-brought to my attention recently for whatever reason (reasons in more detail below), so enjoy!

Inside the Haiti Earthquake is a first-person simulation based on documentary footage from Haiti and real-life decision scenarios. As a user, you are able to experience the aftermath of the earthquake and make decisions as an aid worker, survivor, or journalist in this jaw-dropping interactive simulation created with original footage from Haiti. 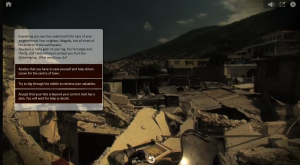 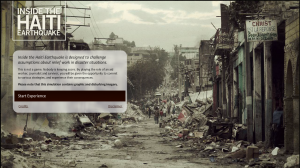 Directed by David Dworsky and Victor Kohler, PressPausePlay examines the digital revolution of the last decade, and how it has unleashed creativity and talent of people in an unprecedented way. Through interviews with artists such as Moby, Lena Dunham, Robyn, and Seth Godin, the film asks if democratized culture means better art, or is true talent instead flooded and drowned in the vast digital ocean of mass culture? Potential viewers are invited to download (for free!) the Air player and watch the documentaries interactive version, which contains extra footage, overviews and links to relevant websites. Although the standard version of the film can be watched in its entirety on Vimeo, you can choose to pay for it via Netflix, iTunes, Amazon etc demonstrating a modern approach to film distribution and still shooting to number 65 on the Top 100 list on iTunes US in February 2012.

I highly recommend you download the interactive version and try it out!

Recently launched at Sheffield Documentary Festival’s Crossover Summit, From the Sea to the Land Beyond is a beautifully put together interactive documentary from director Penny Woolcock about the British coast. Featuring a soundtrack from British Sea Power (apt), the documentary is hosted by the on‐demand digital arts service The Space – which you should also check out if you haven’t already – and is made from 100 years of film heritage stored in the British Film Institute collection. 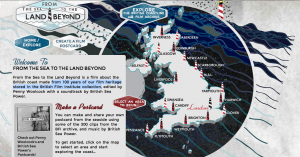 Lastly, we have a i-Doc that was used as a case study during i-Docs 2011, but has recently received new attention as it is premiering on PBS on June 28th (this week!). GRANITO: How to Nail a Dictator tells the extraordinary story of how a film, aiding a new generation of human rights activists, became a granito — a tiny grain of sand — that helped tip the scales of justice. Alongside the film, is GRANITO: Every Memory Matters (GMEM), which is the interactive strand of this project. Created as an online intergenerational, interactive public archive, GMEM is a constructed space to contain the memories that uncovers the history of the Guatemalan genocide.

Granito: Every Memory Matters -3min from Skylight Pictures on Vimeo.