According to National Geographic, every two weeks a language dies and before 2100, over half of the world’s 7,000 languages – many of which aren’t recorded – will disappear.

This is why projects like the Endangered Language Project now exist, to document the world’s languages, not only as a resource but to share advice and best practices for those working to document or strengthen languages under threat.

Powered by Google.org, who are working in collaboration with a number of groups to help set up a website where these endangered languages will be documented, preserved and taught.

Users of the site can explore using an interactive map, clicking on languages organised by a key from ‘at risk’ to ‘vitally unknown’. They can then dig deeper, listening to clips of the language being spoken, access resources and spread awareness through social media. 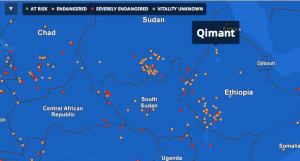 To add to this the site is open for collaboration, users can upload videos and resource documents, as well as join Google groups on specific languages, or the project as a whole. 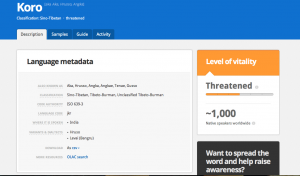 This project is a perfect example of the possibilities of not only archiving for the future, but the collaborative nature of web projects and hopefully the spreading of awareness about the cultural importance of language diversity.