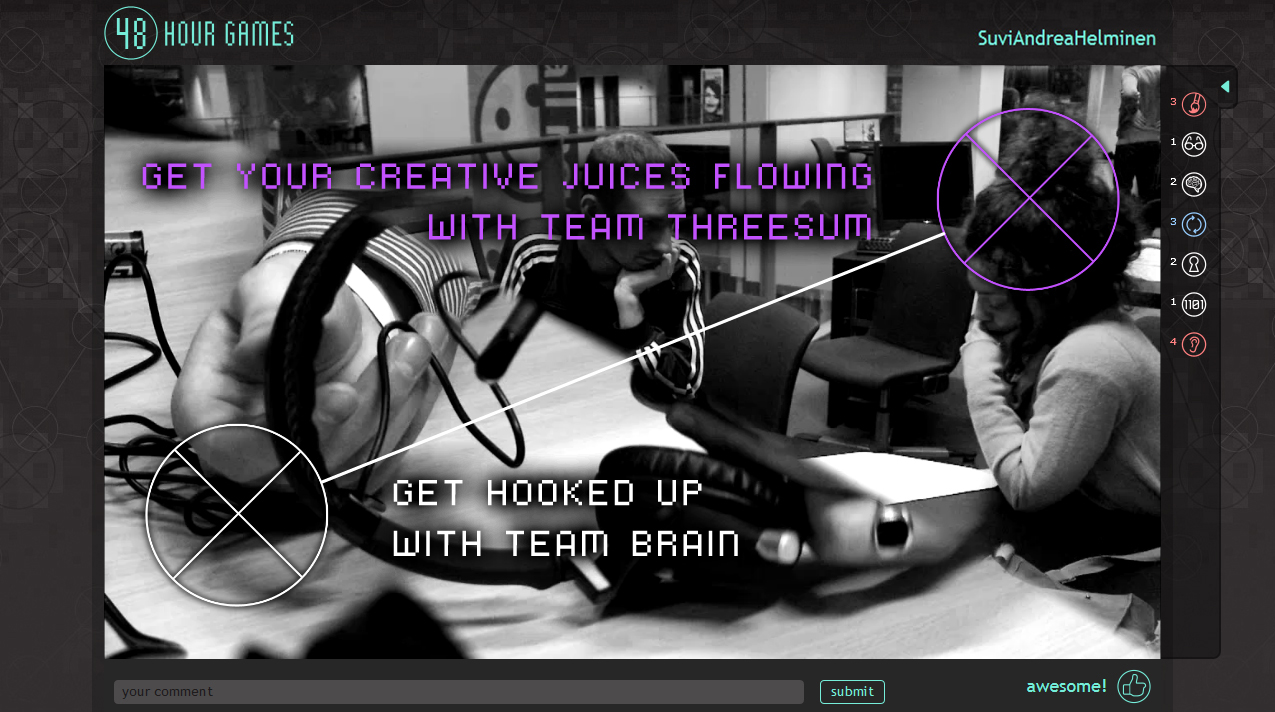 48 Hour Games, a gamified interactive choose-your-own-way documentary, is the first of its’ kind and it’s getting audiences very excited. Programmed from scratch in Flash by games company Knapnok Games, the documentary was shot during the Nordic Game Jam, an event where 300 game developers from all parts of Scandinavia, meet up and compete to create the most innovative computer game in just 48 hours.

Directed by Suvi Andrea Helminen, it follows the progress of different teams and individuals as they go through the ups and downs leading towards the grand finale. The resulting documentary can be viewed online as a solitary experience, or as a live experience with the audience choosing the path;  ”The decision process is based somewhere in between democracy and ”survival of the fittest” – the ones who shout louder get to decide. When the host moves the mouse over the digital choices, it’s about cheering with your whole body. ” – commented Filmmagasinet Ekko, a Danish magazine, who attended  CPH:DOX where 48 hour games was screened.

I spoke to Suvi about the interactive experience, their audience feedback and her plans for the future:

What are the interactive elements in 48 Hour Games?

What has been the audience response from the screenings?

We have received positive response all over from the audience who attended the live screenings. The audience seems to enjoy the physical engagement of shouting and waving their arms. Of course the core audience are people from the game industry or gamers, but audience from outside the game industry have also reacted very positively. Many create a profile and go on their own online journeys after attending a live screening.

Generally it has been a big job to inform about the projects existence in the first place in order to get more people to visit our page and watch the film, maybe due to the fact that we are distributing on our own platform so far, and not through, for example, an organization or a tv channel. It is also the first interactive documentary to be produced in Denmark for the past 10 years, so there is not much experience to draw from.

Do you have any more projects planned for the future?

I’m currently working on several interactive and transmedia projects. One of them is a project called ”Utopia” about an anthropologists journey into a gender-blurred parallel world. The player/viewer is the anthropologist. The initial idea was inspired by on the science fiction book ‘The Left Hand of Darkness’ by Ursula Le Guin. I got initial development from The Danish Film Institute and now we are working on a design document, sound and music concept, test filming and character casting. Apart from that I also work as a writer for DOX magazine on an interactive series and I will begin as artist in residence at MIT Open Doc Lab in September 2013.

’48 Hour Games’ was directed by Suvi Andrea Helminen and produced by Minerva Film in cooperation with KnapNok Games and Nordlys Film with funding from The Danish Film Institute. It can be experienced online at www.48hourgames.com.