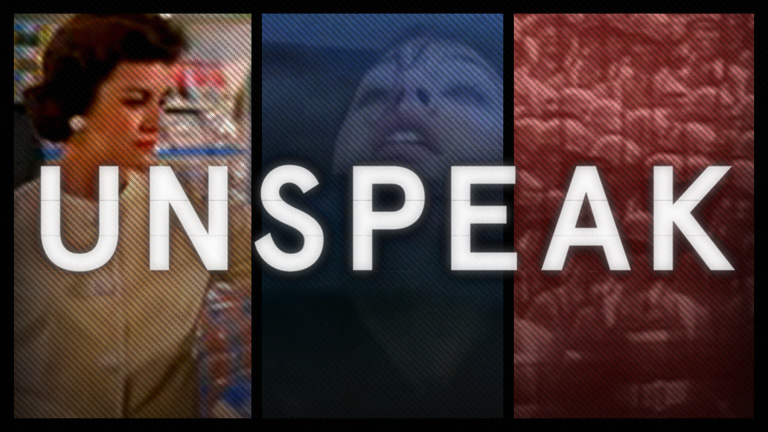 Based on British journalist Steven Poole´s intriguing book of the same name, Submarine Channel presents Unspeak, an interactive documentary investigating the manipulative power of language. Blending filmmaking, data, technology, and design, the story of Unspeak unfolds across a series of short films, data visualizations, and a participatory dictionary in an interface designed for the web and tablet.

I spoke to producer, Femke Wolting about her experience of putting together such a vast project on such a complex subject…

How long did it take to make this project and what was the process that led to its production?

A few years ago I bought Stevens book at an airport and was immediately fascinated by the concept of Unspeak and read the book in one go. It is such a timely and urgent subject, and enjoyed the tone of voice of the book. I felt the book could be adapted as an interactive documentary, because this way you could create an ongoing platform to discuss new Unspeak terms happening in the media. Also the format of the book, short chapters analysing unspeak in a particular field like medical disorders or climate change, lend itself to adapt to short docs. At Submarine we have been exploring using datavisualisations in documentaries. Connecting data to storytelling makes the story more interesting, and in the case of Unspeak, it helps to further communicate the message of the prevalence of Unspeak.

What design processes did you employ? Was this typical in terms of the way you like to work at Submarine?

We developed the interactive concept with the Submarine team. Inhouse we have a great team, a mix of researchers, programmers, designers and producers. Then we reached out to a six directors that have been working with found footage and collage films, such as Jennifer Abbott who directed The Corporation and Rob Schröder who directed Meet the Fokkens, and they each directed a short doc about a term. We collaborated with talented designers from Catalogtree who worked on the datavisualisations and the Urban dictonary. Katy Yudin who has been working on datavisualisations for a long term, developed these for the site. Currently we are setting up a kickstarter campaign to finance new episodes about current unspeak, the first episode on Kickstarter will be an episode about the term whisteblower.  Also we are developing the project further into a feature length doc.

The book Unspeak, by Steven Poole, was released in 2006, what pushed you to create the documentary now?

The topic is not new but nevertheless very urgent. Everywhere you see polarization in politics. In the US but also in Europe. Unspeak is widely used by people who benefit from this polarization, so politicians on the far right, or far left. Journalists tend to copy the Unspeak words to easily and we want to create awareness about this lack of critical reception. We consider Unspeak as part of the course of intellectual self-defense Noam Chomsky talked about when he wrote that “citizens of the democratic societies should undertake a course of intellectual self-defense to protect themselves from manipulation and control, and to lay the basis for more meaningful democracy.” 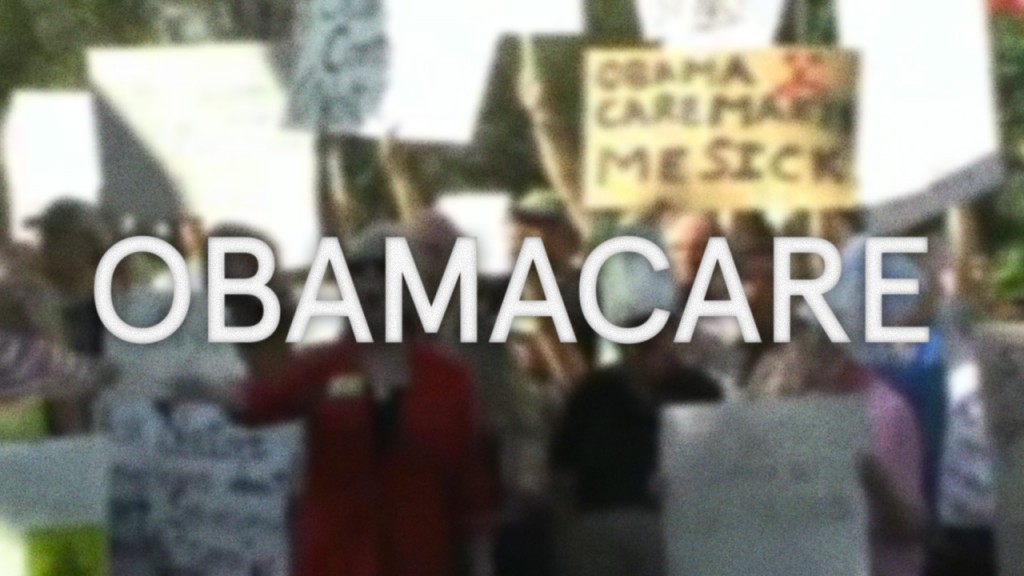 This is a vast, complex topic – why do you think interactive documentary is the right platform for it?

We thought it’d be interesting to see how Unspeak words are widely used across mass media communication channels – like on official news sources and social media – since these words leave behind a data trail that we can mine for meaning. To reveal this hidden layer of digital data, help form new understanding about the prevalence of Unspeak, and offer the opportunity for audiences to playfully interact with and analyze publicly available data about the use of Unspeak we figured that an interactive documentary would be a suitable form. Also through the online documentary we were able to create a platform where people can flag and discuss new unspeak terms on an ongoing basis, something you could never do in a book or a film.

Visually, you’ve predominantly (entirely?) used found footage, why did you choose this style over producing your own material?

As Submarine Channel we are interested in remix and mashup culture, and this was a great opportunity to experiment with it. Since it is a project about media, we wanted to use the media in a very pragmatic way. Eager to turn our backs on traditional TV format, we have done away with the idea of a film crew and concentrated on the words of the idea we are conveying. We then look through the vast Internet world of images and look for points and counterpoints to our argument. We then try to find the balance between the illustrative and the poetic. 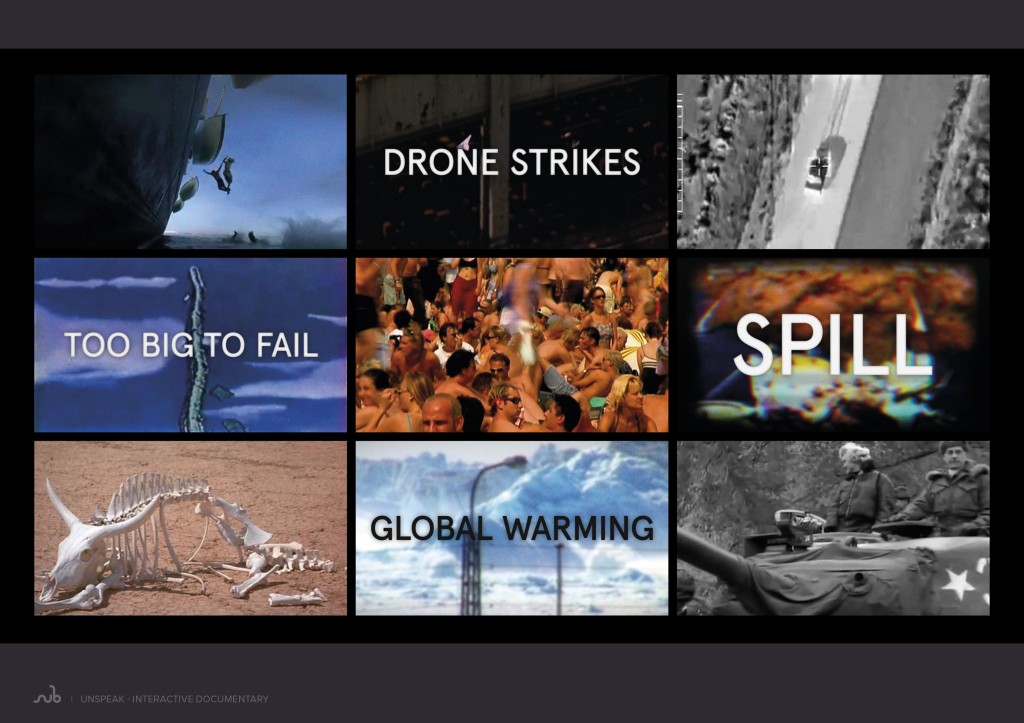 I found myself laughing at quite a few of the videos, how do you strike a balance between serious content and entertainment?

The voice-overs are written by Steven Poole, the writer of the book. He has a very sharp mind and a very witty pen, but he delivers his ideas quite understated, as an Englishman should. With the videos we tried to underline this style, but not always literal. Sometimes the images are a mere illustration of his words, but more often the films are more associative. In a way we stimulated the directors to make a form of visual Unspeak,  to expose the ambiguity of images.

The interactive options for this documentary are quite different to other idocs I’ve seen recently, with the user journey split between the episodes, data and terms, was there a reason for this and how do you envision the user journey?

We suggest you start out by watching at least one of the films before exploring the related content. You’ll find films ranging from the financial crisis to health disorders, to the environment.  About 10 Unspeak terms are covered in each episode, which can then be individually explored through the unspeak dictionary. Besides flagging new unspeak term, here you can browse definitions, vote on the best ones, contribute alternative definitions to existing terms, or suggest sources like news articles or videos where Unspeak language appears. 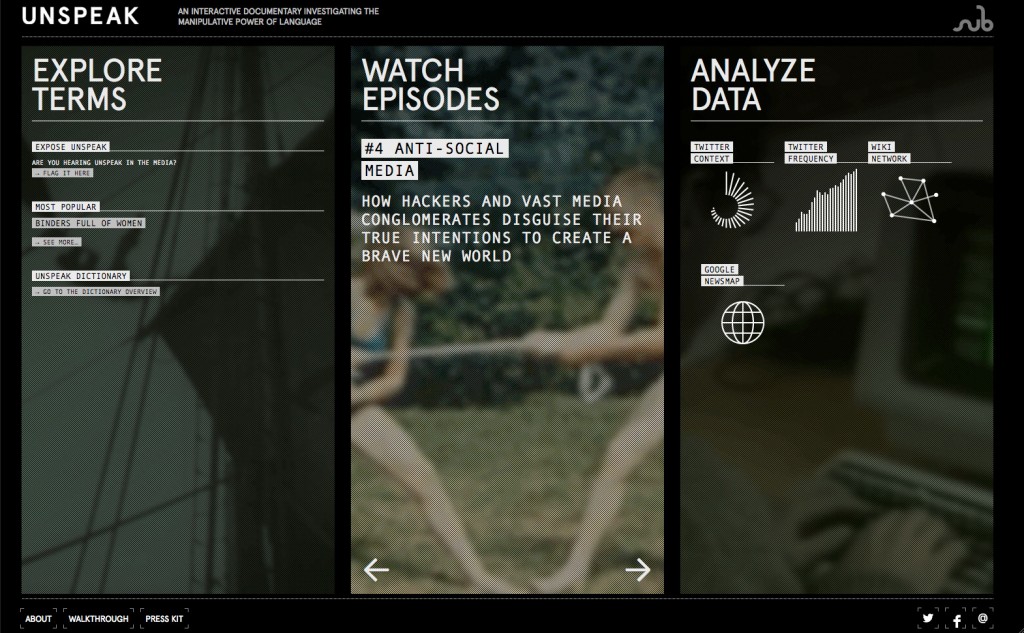 Part of the experience is the ability to submit your own examples of Unspeak – how has this level of engagement been received?

Steven Poole started a blog about Unspeak after publishing his book, because he kept writing about new Unspeak words he came across. This generated a lot of discussions on his site. This is what we like to facilitate further with the interactive documentary.

Beyond releasing this online, do you have any other plans for Unspeak?

We have gotten very enthusiastic responses to the project, and broadcasters have expressed interest in a longer film about the subject, that is something we are currently developing.

The data visualisations are beautiful, I particularly like the Twitter frequency and context – How was all the data gathered and the visualisations built? Did it take long?

Together with Ai Applied we developed software to scrape news sites for us for some time. They also mined social media platforms like Wikipedia and Twitter. They built very sophisticated software to get the right data, using complex algorithms. With the design team from Catalogtree we developed different kinds of designs to visualise this data. 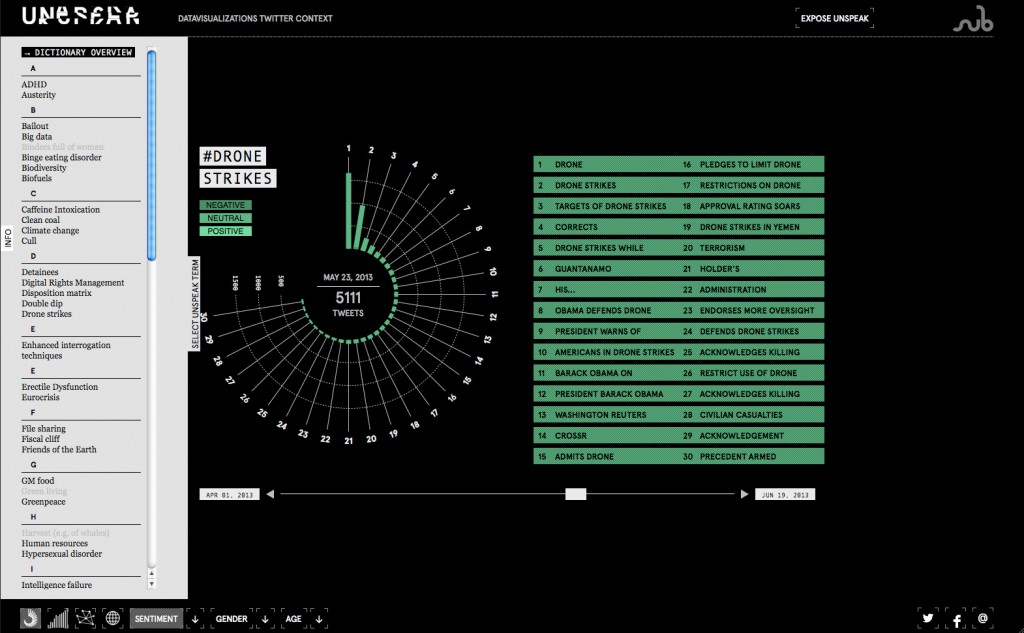 Within the Twitter data, what made you chose gender, age and sentiment as your categories?

We considered that these were interesting subdivisions to explore. You can distill a lot from the data, but not everything is accurate. Categories like gender, age and sentiment can fairly accurately being estimated.

“Once you tune in to the wealth of daily Unspeak talk, you’ll start seeing and hearing it everywhere. And then, perhaps, we can fight back.” – If watching the documentary is the first step, what should people do next?

Start submitting to the dictionary! Once we have sufficient new terms within one domain, we will make a new episode and get it out there.

So every time you read or hear a word like for instance Arab Spring, you ask yourself ‘wait a minute, for who is this spring time? Is it not to early to call it spring, etc….”

There’s 6 episodes at the moment, do you plan to release any more?

Definitely! We are planning a Kickstarter campaign as we speak.

If you haven’t already, check out Unspeak and keep up to date with the project through the Unspeak Tumblr.