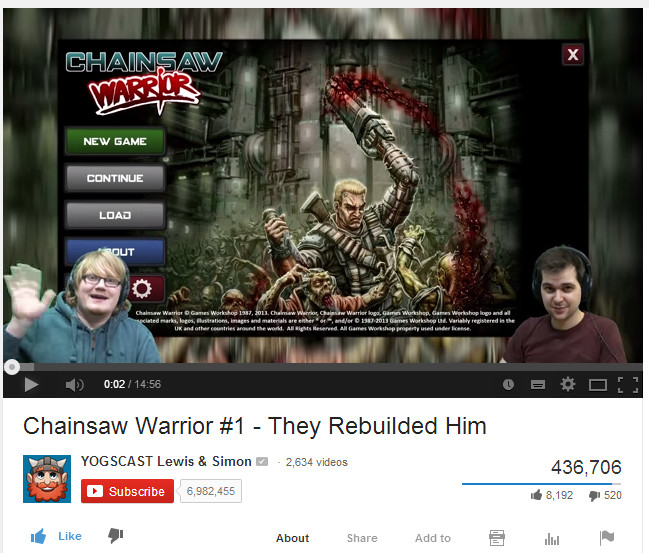 I connected to YouTube on a new device recently, so a device without the vast user history Google likes to collect. I noticed at the top of the screen were the top 5 ‘Most Popular Right Now’ videos for the UK. What struck me was that 4 out of 5 were video games. The only non video game offering was a Beyoncé video in second place. First place was taken byPewDiePie and third by the Yogscast people. There was also a lot of Minecraft going on in that top five. If the only name in the last three sentences you recognise is ‘Beyoncé ‘ then I suspect you’re not a gamer and might have missed there’s been a revolution in video content going on with video games at it’s forefront.

I asked Rich Keith, General Manager at Yogscast – the first UK YouTubers to pass a billion, yes billion, views how he’s sees the rise of gaming on video, “Games are an inherently visual medium and video – especially now that video can be viewed on so many devices in so many places (for instance more that 50% of our views are from smartphones and tablets) – is the most direct way to experience a game without going to the trouble of actually playing it. It’s a classic case of something that’s grown organically, in the dark and become massive without any mainstream appreciation. Some of that is because it’s a younger audience – it’s the 13-21 year olds, or ‘Millennials’, and some of it is because it’s not driven by the big hit games that tend to make the news, like Call of Duty or FIFA (although those games now do pretty well on YouTube), it’s Minecraft and other ‘indie’ titles that have led the way. But make no mistake, gaming YouTubers are big stars and their appeal is based on personality and engagement in a way that other media can’t do. They reach millions of people in an incredibly intimate way.”

So where is TV in all this? I’ve been a video games developer for some time now and have attended many meetings and events with TV and film people (in fact I’m off to DocFest this weekend to show our latest prototype, a playable documentary about Jack the Ripper). In such circles, games are often cast as some annoying younger sibling, one who seems to be at odds with the rest of the group. TV has (and does) try to ‘do’ games; GamesMaster being the most often cited example here in the UK. However, imagine if you’d sat down to a meeting of TV commissioners and suggested that TV cover video games much more and the new format was to be a two hour show where the host just plays game and talks. It would be the shortest commissioning meeting in history, I suspect. Yet a look at the top global YouTubers, shows the list is dominated by gamers – with PewDiePie and his 27 million subscribers at number 1. The open waters of the internet have provided a space for experimentation and video games have been innovative with a series of video experiments. Here’s five examples of how video games have been re-defining video whilst TV was looking the other way…

1. Let’s Plays – This is a video format where, as noted above, the host chats as they play a game. Within gaming, ‘Let’s Plays’ are currently redefining how audiences discover computer games, taking over from the traditional magazines and website coverage. A ‘Let’s Play’ is not a review or necessarily an introduction to a game – it is simply a recorded play session with a host. The same games (Minecraft!) tend to get played over and over, offering the hosts and audience a shared space that both understand. Speaking to my fellow gamers; many now prefer this as a means of finding a new game as they get commentary from people they enjoy listening to while getting to see the game in question. Let’s Plays are often well over the 30/60 minutes normal length of a TV show so asking their audiences to commit serious amounts of time, which they do, in their millions.

2. Twitch Plays Pokemon – Twitch is a platform that allows players to broadcast their gaming sessions live for all to see. Twitch itself is a pretty interesting system and the rise of the company behind it is also an important story (more on that next!) It was also the stage for a fascinating social video experiment and internet phenomenon. A programmer set up a Twitch account running an old Game Boy version of Pokemon. They then allowed the audience to issue commands to the single character in the game via the live stream’s chat-feed. The question then became; would the massed audience (over 100,000 at points) be able to co-ordinate into a single character to complete the game? The stream began on Wednesday 12th February 2014 and 18 days later the game was completed. Hundreds of thousands of people playing together had completed a single-player game. It’s a remarkable use of video and social so expect to see many more people copy and expand on the idea.

3. Twitch – Twitch itself started life at Justin.tv, a premium videocast site that hosts a range of content, all created by allowing users to stream their own live content to the web. The gaming categories exploded in popularity and soon became ‘Twitch’. People use Twitch to broadcast their games as they play and invite others to join them to watch and chat. All sorts of new social exchanges are taking place powered by Twitch and it has grown to such an extent that the service is the often fourth largest source of internet traffic during peak times in the United States, behind more well known systems such as Netflix, Google, and Apple.

4. Dota 2 eSports – eSports, or the playing of video games as a professional activity, has been around for some time, however with the advent of Dota2 some really interesting things are now happening in this space. Dota2, or to give it it’s full title ‘Defence of the Ancients 2’ is a game where the players control heroes who must defend their home base whilst attacking an enemy base. It’s a sub-genre of game known as a Multiplayer Online Battle Arena (MOBA). These are very strategic games where the subtlety and nuance of the play become important and watchable. There are leagues and competitions for Dota2, much as you’ll find in other sports such as football. However this is still a community-grounded affair and movement between fan and pro is very porous, so its feasible that you might be watching the championships one year and competing in them the next. Not only that the prize pool for Dota2’s main championships comes from the fan purchases of special game add-ons (run by Valve), this year the pool is running at around $8 million. If you’re interested to know more, check out a new documentary that charts this new eSport, Free to Play, which you can find here.

5. Minecraft – No discussion of this nature could be complete without a mention of Minecraft, the happy marriage of a building and gameplay has become a huge phenomenon. It’s a game-like system which allows players to build blocky new worlds and add interactivity to them. This openness to the system means players can, and do, build amazing things for others to play/explore. This has created an entire industry of let’s play videos where creators can really show off their crazy skills to an appreciative audience. Players watch such videos not only to see the amazing creations that others have concocted but also to be inspired and learn how to do things themselves. To date Minecraft has millions of paid downloads of the game and it shows no sign of losing it’s popularity.

So in summary; if you want to see some interesting directions video is going in, take a look at games!

PS. If you’re interested in our experiment in merging games and documentary then you can see the prototype below and here and sign-up to the mailing list here (plus there is more information here).