This article is an excerpt from Ben Hoguet’s book Narration Reinvented – a guide to creating, designing, producing and distributing innovative interactive narratives and transmedia works. With permission, it has been translated with from French by Jess Linington. It is worth noting a few of the examples used are French projects that may not directly translate to English. You can read the original here.

There is an obsession about the time spent by users on interactive works [in part driven by financial models] with a particular focus on the user ‘taking their time’.

I want to explore this link between time and new forms of media on the web.

The nature of time

Time is a measurable component of the universe, which can have philosophical and religious meaning attributed to it, and even a visual representation – linear or cyclic – but these fail to characterise its’ exact nature.

At best can we say that time expresses a movement or a change.

The art of storytelling has always been linked to time, for it also expresses a movement. A movement that can be continuous and linear, but can also slow down, speed up, distort or even pause. A pause for example, is a fundamental component of interactive works because it gives users the opportunity to make a choice, to reflect on the implications of this choice and take a direction that will influence the rest of the story.

The scarcity of time and competition

The relationship with time in human history has not always been constant and may vary from one person to another, or from one era to another. Recently, almost universally, the perception of time has been drastically distorted. Urgency has become a norm, and time is a precious commodity. One that we must manage, save, optimise and monetise.

“Urgency has become a norm, and time is a precious commodity. One that we must manage, save, optimise and monetise.”

Blame the Internet, media, marketing and marathons of Breaking Bad. In the end, the conclusion remains the same, all these human creations and activities are competing for your attention.

If you produce an interactive documentary, you’ll have to convince your audience to spend time with your work over other documentaries, TV shows, movies, video games, books, social networks, Wikipedia, YouTube, as well as activities such as transportation, household chores and perhaps incidentally; work, food and sleep.

Even if we see nothing wrong with watching a series while scrolling on Wikipedia, tweeting with our left hand and eating more or less properly with the right, time remains a factor and these actions become part of a “competition” for how you spend it. This vision – one assumed by Netflix – radically changes the relationship a piece of work can have with the public.

For some, the answer is simplistic – making work for the web should be short, with the illusion that the user can then consume more. Others take the opposite view, pointing to long-form works such as Snow Fall and very “dense” experiences such as Prison Valley, Alma and Fort McMoney. Works which are more demanding of the user and require more time, rely instead on the immersion and involvement to hold their attention.

“Works which are more demanding of the user and require more time, rely instead on the immersion and involvement to hold their attention.”

Time as a success indicator

Success for interactive works is often measured by the overall volume of users, but also the average time they take on the experience. So even if there is good community management or a large communication campaign (which can work wonders in terms of hits) these are futile if the experience deters users in a minute or two.

Thus we saw Les Inrocks [a French cultural and music magazine] congratulate the webdoc team behind “Journalist 2.0”, a project which saw 9,500 unique visitors stay an average of 7 minutes 31 seconds. The figure was declared a success, but needs perspective. Given the number of visits is limited, makes me think that this is primarily a niche effect: a web documentary made by journalists, for journalists, that has not necessarily reached a wider audience.

Also, why is the time spent the only indicator of success? If an experience is intended to influence public opinion – by encouraging to sign a petition for example – true success would be the rate of “conversion” of spectators into actors of change.

Another measure, could be an experience where a user can take multiple paths, for example the Game of Influence [First Lines / France Télévisions]. On average users played 1.5 times, which means that many took the chance to take other paths in a second or third go. This data is almost more telling of the success of this game than the 25 minutes spent on average per player.

For ARTE and Fort McMoney, one of the goals of the experience is not the overall number of visits, or the time spent by each user on average, but to engage at least 10,000 players. A player being characterised as a user who returns regularly, at least 1 time per week to watch content, earn points, play the game and join the debate.

Success and time will therefore always be intertwined, but individual projects must determine the “facet” of time which is the most significant, rather than looking for a blanket measure.

“Individual projects must determine the “facet” of time which is the most significant, rather than looking for a blanket measure.”

Every art form has undergone substantive innovations, putting time at the heart of creativity. The novel plays with narrative time, anticipation, alternate histories; Film and television operate the flash back or forward, the real-time story with the 24-part series, the simultaneous account of several stories like the movie Timecode. And of course the new entries are no different. Here is a small (and probably not exhaustive) typology of interactive modes of the representation of time;

Possibilities offered by the web for displaying time are many. Among the most common are timelines. They can consist of a simple series of content placed on a scale – Timeline JS for example – or they take more sophisticated forms, like Killing Lincoln, where the audience can follow a chronological, step-by-step account of the events leading to the assassination of the US president. 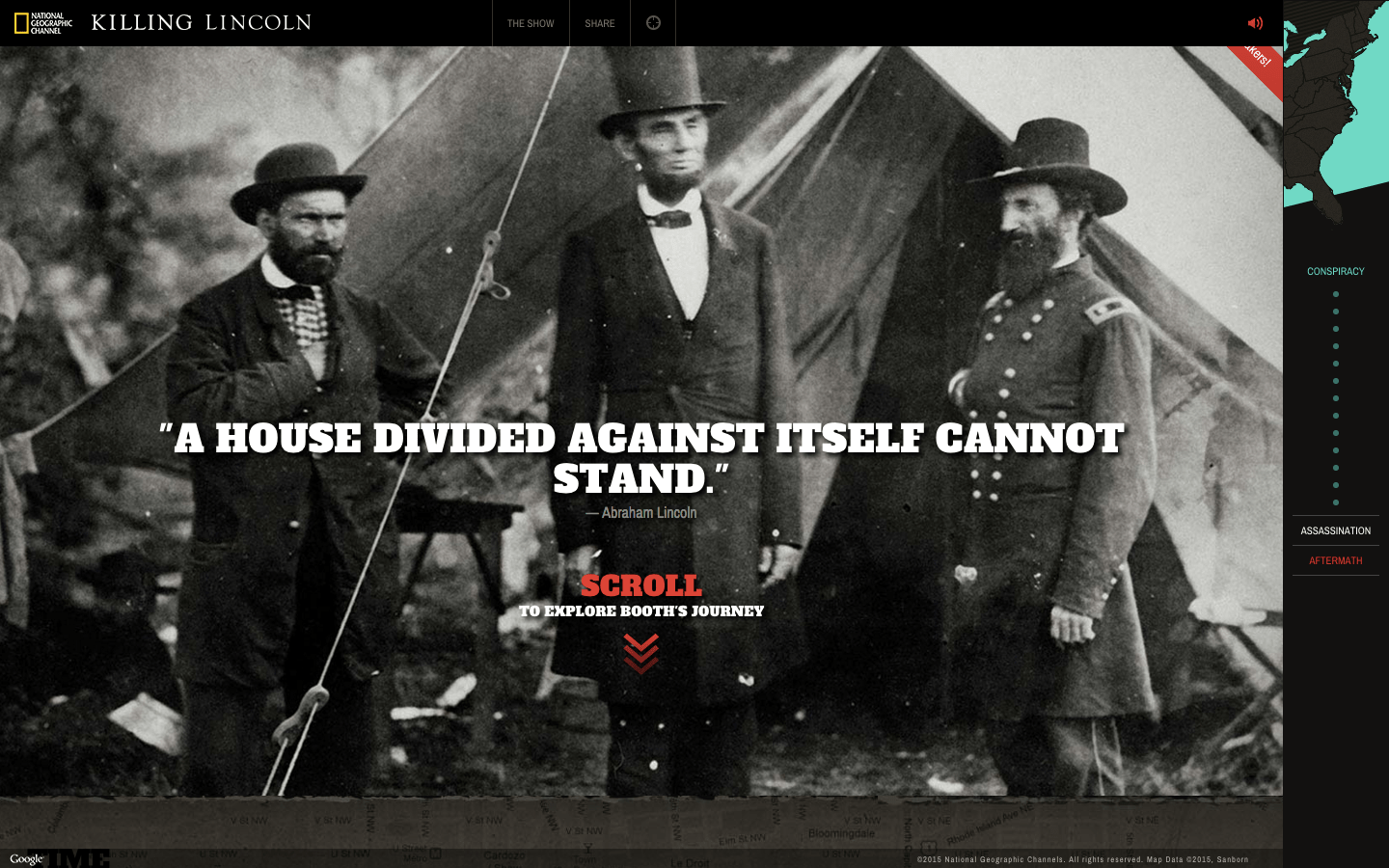 Split screens, often thought to show several actions in different places, can also help to tell the stories of events taking place at different times. The web doc La Marche d’Après uses this method to draw a parallel between the 1983 march for equality and its’ repercussions today. The user can freely choose to delve into the past or the present.

The timelapse shows accelerated long periods of time, often requiring the use of a lot of data but results in a striking effect. The project Timelapse, made with Google Maps, is notable in this respect.

Another simple, but effective mode is the “layered image”; overlapping two photos taken at the same location but at different times, so the user can move a cursor to see a change. An example with this incredible map of Chicago before the great fire or the project Pekin Sans Transition on French culture.

And of course, time can also be expressed through the chapters of a video or progress bars. Here too there are ways to innovate, as in the interactive fiction world 6 Million Dead where a user can see on the timeline the path taken, but also see what has been neglected along the way. 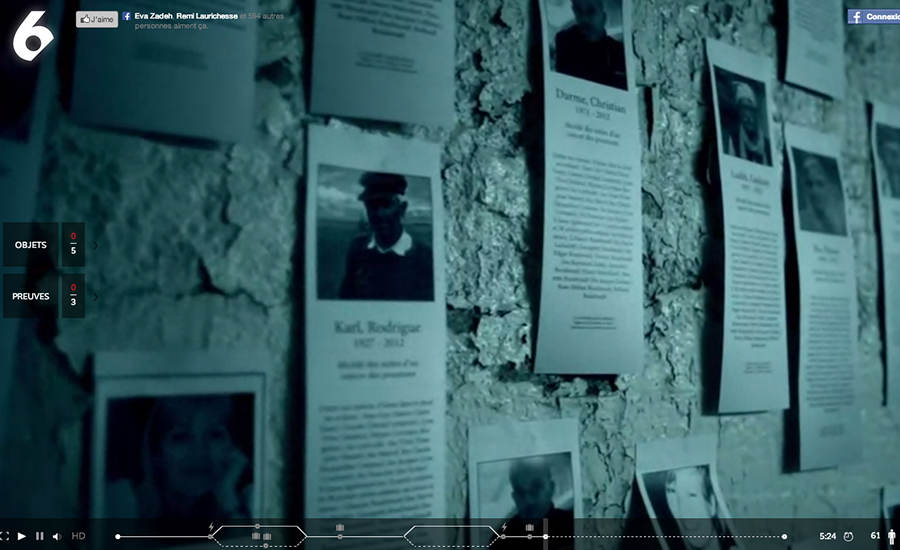 Interactive projects often allows the user to become the master of time, they can go back through it, stop it or accelerate it. But they also allow authors to change their perception of it.

A basic vision of Western culture remains to be the linear nature of time. Yet two radically different projects have wanted to break this vision: interactive music video 24 Hours of Happy and web-documentary Stainsbeaupays.

Both have roughly the same navigation. A wheel where you can choose the starting point, but then plays in a continuous and “linear” way. There are no pre-established starting points given by the author, no excessive prioritisation of content.

The creation of randomness versus time is also a possibility, as in the web documentary Gare du Nord which, depending on the time of day when you connect (morning, afternoon, evening), takes you to a different experience.

Another method – strongly linked to the advent of social networks and mobility – choose instead to make live events the focus of an experience. This trend has been identified as fundamental to the future of new narratives by a study from The Future of Storytelling and is regularly used in transmedia fiction. One example, the series Cut, constantly maintained the Facebook and Twitter feeds for the characters. 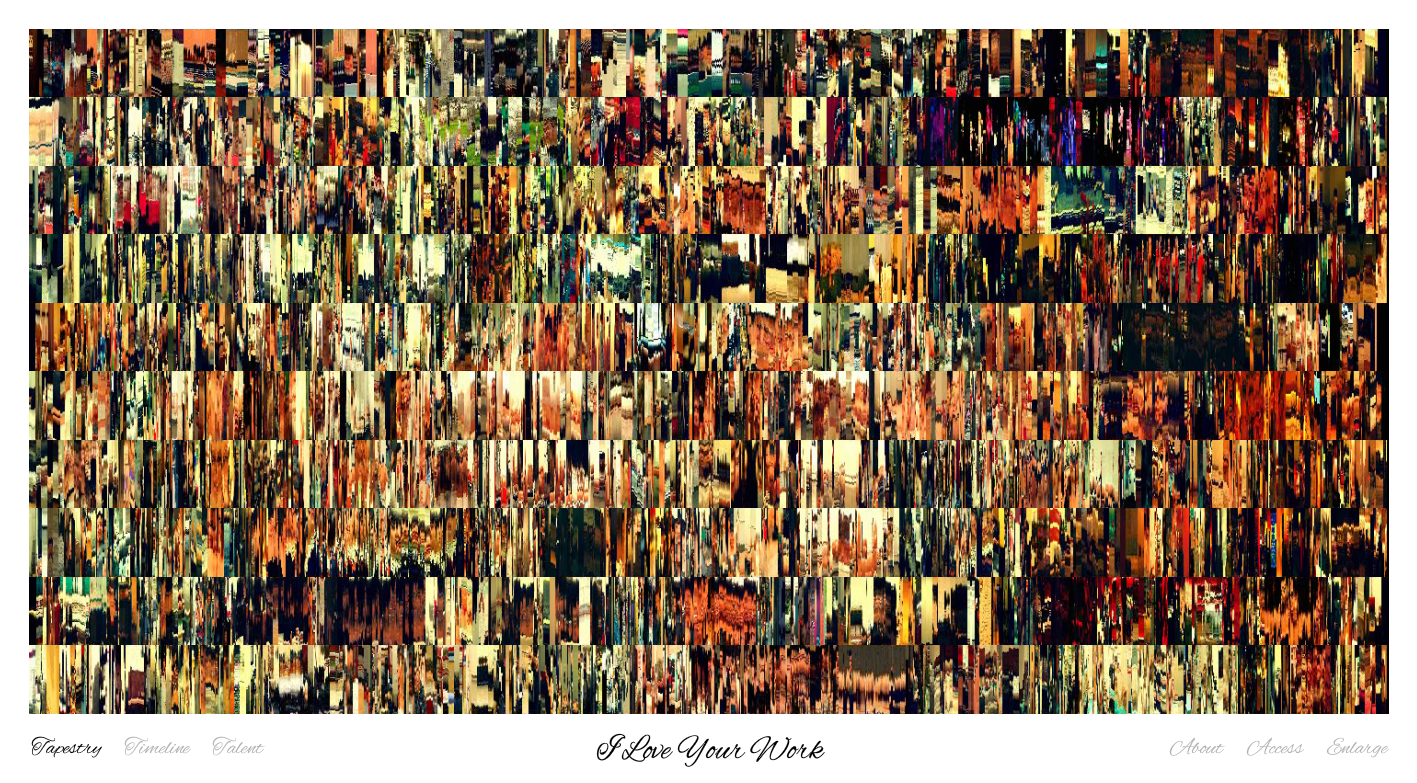 Lastly there are the projects that force you to adopt a different perception of time. Consumption of content on the web often follows the rule, “when we want, where we want ‘. A practice some projects have sought to disrupt. The Journal of Insomnia for example, where users had to wait until the evening to interact with the work. Or I Love Your Work, a ticketed i-doc costing $10 which allowed only 10 ‘places’ a day. This tended to create a long wait for users to experience the work.

“These projects are almost militant acts from those who refuse to conform to the instant gratification of the web.”

These projects are almost militant acts from those who refuse to conform to the instant gratification of the web.

There is another problem that occurs for certain projects: What is the life-span for the interactive experience? The problem does not always arise for “finished” i-doc content or interactive fiction with limited boundaries, which can potentially remain in place indefinitely (although at some point the issue of sustainability of some web formats will arise). But the question arises – perhaps hopelessly – for participatory and social projects, because it’s almost impossible to maintain user engagement.

Many projects choose to interact with users for a limited time, before leaving the platform live, with all its content as evidence of past contributions. The film Life in a Day, the participatory platform the Counter-History of the Internet and The Brussels Business Online are perfect examples of this practice.

Sometimes people persist in a more discreet way, eg. the discussion forums around Prison Valley  remained open for several years, allowing users to continue to share. However the attention around the project has considerably reduced.

For all these projects and others – “total fiction” Alt-Minds and documentary game Fort McMoney – designers must always ask the question about the trace that will be left once the main phase of the project has passed.

To conclude, a small remark about the need to take time.

In many ways, the production of interactive and transmedia works is more demanding than traditional linear ones. They require more collaboration, preparation and often a more complex production process. The interactive works that have received the most attention all needed hundreds or thousands of hours of work.

So take time, show time, play with time, distort time. There are many levers on which to base new projects, many ways to innovate and to plunge the audience into an interactive experience that will mark their time in one way or another.

You can read more of Ben’s writing on his blog. If you’re interested in reading more about the attention economy, check out this recently written Medium piece which delves into a lot of the same issues.